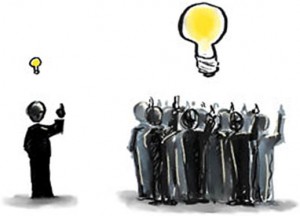 According to Crowdsourcing.org, venture Capitalists invested more than $280 million in 35 Crowdsourcing companies in 2011. This was confirmed by a comprehensive report published in Ferburay 2012 produced by Massolution a research firm specializing in crowdsourcing solutions. After data were collected from 32 Crowdsourcing Service Providers, the results revealed that crowdsourcing continued to demonstrate growth in 2011.

So what is Crowdsourcing? According to Wikipedia, Crowdsourcing is a process that involves outsourcing tasks to a distributed group of people. This process can occur both online and offline, and the difference between crowdsourcing and ordinary outsourcing is that a task or problem is outsourced to an undefined public rather than a specific body, such as paid employees.

The origins of Crowdsourcing are to be found in the early work of Eric Von Hippel, professor at MIT, in the late 70’s: “Users as Innovators” (Technology review, 1978) and “Get New Products from Customers” (HBR, 1982). In the early 2000s, an article in the Business Review, Co-Opting Customer Competence (Ramaswmy and Prahalad , 2000) defined some key pillars in the co-creation model. However, the term was really born in 2006, in an article by a contributing editor at Wired Magazine, Jeff Howe, “The Rise of Crowdsourcing”, and popularised 2 years later through his book, Crowdsourcing, Why the Power of the Crowd Is Driving the Future of Business. Click here to see the video of Jeff Howe.

Nowadays, the term crowdsourcing has become commonplace in the business world. This can be verified simply by doing a Google search: there are more than 10M pages that make reference to crowdsourcing.

To get a really good understanding how widespread this phenomenon is, have a look at the Crowdsourcing Landscape Framework produced by Ross Dawson below: More and more traditional large firms are leveraging the “wisdom of the crowd”. For instance, Starbucks has received 100,000 innovative product ideas from their customers on MyStarBucksIdea.com in 2 years . Since 2007, Dell has received over 17,000 ideas through its site IdeaStorm and implemented 500.

In conclusion, as Bill Joy from Sun Microsystems said, “No matter who you are, most of the smartest people work for someone else”. In most cases, pertinent knowledge resides outside one organisation and crowdsourcing is a new way to access to it.