If you search for “Web 3.0” in a search engine, the most common definition you will find will be related to the Semantic Web. But what is the semantic web?

Semanticweb.org tells us: “The Semantic Web is the extension of the World Wide Web that enables people to share content beyond the boundaries of applications and websites. It has been described in rather different ways: as a utopic vision, as a web of data, or merely as a natural paradigm shift in our daily use of the Web.”  Hmmm… this doesn’t really help. Does it?

Let’s try Wikipedia: “The Semantic Web is a collaborative movement led by the World Wide Web Consortium (W3C) that promotes common formats for data on the World Wide Web. By encouraging the inclusion of semantic content in web pages, the Semantic Web aims at converting the current web of unstructured documents into a ‘web of data’. Ok, that’s better. But it’s still not super clear.

So let me give it a try and tell you what I think WEB 3.0 is by going through the various stages of the WEB.

WEB 1.0 was the “mostly read-only web” (Sir Tim Berners Lee); it was all about content. Information was produced by someone (a producer) and consumed by someone else (a consumer). It was a one-way interaction, the era of portals such as Yahoo! and other directories. It was also all about YOU. What you liked, what you bought, what you did…

WEB 2.0 was (is?) the “The widely read-write web” (Sir Tim Berners Lee), putting people at the core of everything. It is the user-generated content era. Everyone can be a producer; everyone can be a consumer. People are consuming as well as contributing information through blogs or social networks. It is not just about YOU anymore but also now includes data about your connections. It is all about what your friends like, what your connections did, etc. For instance, let’s look at Tripadvisor, the Hotel and destination user generated review website. Now, by connecting your Tripadvisor profile to your FB account, you can see who amongst your friends went to Bali and easily ask them for some recommendations for a hotel in Kuta. It is not just hotel reviews produced by a professional. It is not even just hotel reviews produced by an unknown person. Now it is reviews produced by a friend/connection of yours.

WEB 3.0 is the logical next step. We also describe it as the “personable, portable Web”. The emergence of mobile browsing added a whole new component to the production/consumption of data. It is now not just about you, your connections but also about where you are, where you were, where your friends are, where your friends were. Web 3.0 applications will become personal assistants, learning and personalizing results by consuming data generated explicitly (through the searches you made when you were looking for a restaurant for instance) or implicitly (when you check in at a restaurant or by knowing that John is your friend and likes this restaurant).

Again, this view is just my opinion. Certain observers will probably criticize this definition, arguing that it is too narrow and doesn’t include other key elements of WEB 3.0. True, however, my point here was not to give an exhaustive definition of WEB 3.0 but more to describe the next evolution of the Web where automated personalization of content will be based on data produced by you, your friends and your location (see the diagram below). 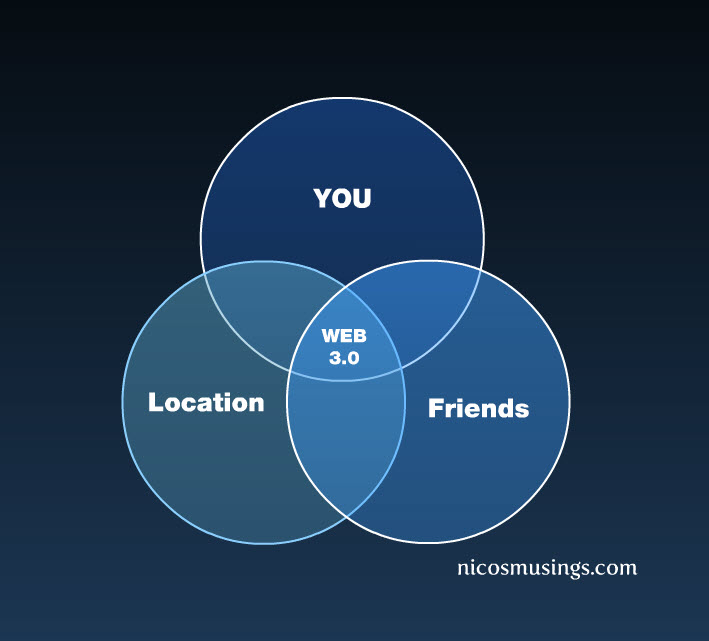